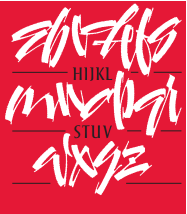 Decades ago, as a struggling commercial artist, I realized that I was missing one element in my repertoire. Brush lettering. To handle the brush and get anything of quality out of it was a sobering experience.

As examples of expertise there were Karl George Hoefer, Sherry Bringham and Carl Rohrs. I began to try and emulate some of these masters with other tools and mediums. After playing with the magic marker on rough paper I looked for alternatives. Along that vein I began cutting chisel edged calligraphy markers at a cant and (so they could mimic magic markers) pushing the stroke, instead of pulling it. This gave the terminals the proper angle and, with the right paper, it appeared to be brush lettering.

Then it was on to Speedball B’s. With a bit of manipulation the brush could be imitated. Even some of my peers were fooled. I have continued to use this technique in my work.

This class will explore the possibilities of the Speedball nibs and their capabilities. What appears to be very fluid is actually very considered writing. We will familiarize ourselves with the nibs, my techniques and then work on developing individual/personal styles. Materials are inexpensive and the possibilities are endless. Bring a small piece of poetry to do over and over again until it glides across the page like a sleigh going down a hill.